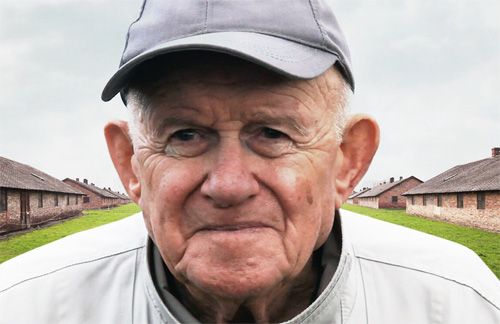 “The good things I recall quite fondly”, says Mordechai Ciechanower, “but I don't forget the bad.” And how indeed could he forget the murder of his mother and two sisters, taken from him in the camp which was later to become the symbol of the mass murder perpetrated by the National Socialists? He himself managed to survive the concentration and extermination camp of Auschwitz-Birkenau by working in the roofer unit.
Mordechai Ciechanower, who now lives with his family in Israel, comes from the small Polish town of Maków Mazowiecki. He has decided to share his memories as long as he can still breathe, thereby ultimately keeping the promise he gave to all those who did not survive.
In Johannes Kuhn's documentary “The Roofer of Birkenau” the 89-year-old contemporary witness revisits all of the concentration camps to which he was displaced: Auschwitz, Stutthof, Hailfingen/Tailfingen, Dautmergen and the infamous camp of Bergen-Belsen. On the site of the DP camp of Feldafing, a fond memory is at last awakened: The unexpected meeting with his father, who he presumed dead, a few weeks after being freed.
At each of these stops, the committed protagonist of this story readily talks with the people there, in doing so showing that hate is a foreign concept to someone once so hated. Mordechai Ciechanower inspires with his vivid descriptions, his musicality and, despite everything he had to contend during his early years, with his optimism and inimitable sense of humour.

(Age limit in Germany: suitable only for persons aged 6 years and over)